Fear in a wild canine is a perfectly viable option for survival, and can be used to stay alive in dangerous situations, but fear in our domestic dogs becomes a horribly debilitating habit. Fear can dominate the animal’s outlook and daily experiences in life. The fearful dog’s social circle soon starts to implode, and eventually, the human owner’s social circle does as well. This is an all too common occurrence. Fear in a pup or dog blocks intelligent learning, playfulness, and sociability. Remember, sociability is the real key in an animal whose very life depends on living in a pack.  Once a dog starts to use a habit of fearfulness, he goes right into a fight or flight response instead of investigating the new stimulus (new place, person, dog, or random item) with its nose, you are bound for trouble.

A healthy, normal domesticated dog should be everyone’s friend. This does not mean they will stop their guardian barking if there is someone at the door or in the middle of the night. Dogs are very sensitive and should be able to distinguish between a guest or family member you’ve already invited in to the house from a burglar attempting to break in at night. They should run to meet people, and dogs, and then slow upon their approach as they switch from eye contact into sniffing and smelling with that wonderful nose of theirs. About 65% – 70% of the canine brain is dedicated to the olfactory system. If your puppy or dog isn’t smelling and sniffing it is Not using much of it’s brain! I always recommend people– and dogs– use their brain.

As owners of dogs we can learn to read our dog’s body language, and their body will reveal exactly what is going on in their brain. Dogs are brutally honest. A dog will never lie. If a dog is uncomfortable or nervous it will tell you with its body. This helps us decide what to do to help change the dog’s fearful state of mind. A dog’s movement is key in deciding how we are to move in response to their fear. Leaving a situation when a dog is fearful is seldom the answer. If you let a fearful dog just leave, or go into flight, how will it ever learn to conquer the fear and enter into relaxation?

The most important thing to remember is to never coddle or comfort a fearful dog. And never pick a nervous dog up or allow them to hide behind or under you. So many people think if we just work a bit harder to “win over” the nervous dog with more soft human talking or treats, or praise or petting to comfort the animal, it can help. If you talk softly, praise, treat, pet or coddle fear– it will only grow more fear in your dog and hurt it more psychologically! I see many owners in unhealthy relationships with their dogs where the dog is simply using them as a source of comfort in order to stay fearful and even aggressive!  Fear should be ignored most of the time. Sometimes it needs to be adamantly disagreed with first and then ignored (especially in the case of aggression or extreme flight.) Think of what a mother dog or wolf would do with a fearful pup…Nothing! She would not comfort or protect it more than all the other normal pups. In fact, we know that many times the fearful pup never even survives into adulthood. Fear is totally self consuming. As a pack predator who is supposed to play, run, groom, hunt, learn from, and eventually contribute to help the group, fear is a horribly selfish weight to have on your shoulders. Fear is anti-pack.

If you have a rescue dog, and it is now living with you, it is no longer a rescue dog! Do not keep your rescue dog as a victim! This is one offense most of humanity is guilty of. People also want to tell me the dog’s back story. Do you think the dog actually cares about it’s back story? One dominating part of the dog, wolf, or any other animal’s brain is that they live in the moment. This is how a dog can learn a habit faster than a human being (we’ll talk about habits in the next Pet Connection issue). Because all animals are survivalists, and have a constant need to be aware of their present surroundings and environment, they move on from the past extremely fast. We are not like that. The human brain is constantly imagining things, time traveling between the past, present and future. When we watch TV our brain takes us there. When we read a book our brain takes us on another speedy adventure, et cetera.

There is a huge difference between our traveling brain and the ever present brain of a dog. Here’s an example of how terrible it
is to keep a dog labeled a rescue:  If I introduced you to my wife, and then proceeded to tell you she was a victim, and then described every failure or mistake or weakness she had in the past would that be fair to her? Would she like that? Would that bias your opinion of her and how you decide to treat her? Of course, that would be atrocious. I’m telling you now it is even worse when we do that to an animal that is constantly ready to move on and is living fresh in the moment each day.  A dog is always ready to be rehabilitated back to a normal healthy social state of mind, and to keep it as a “rescue” or victim is doing your dog great harm.

This is also why many people have trouble after just a few weeks of living with their new rescue. The dog has had a chance to check out the environment, and is now deciding he’s no longer weak, and maybe he will start claiming and dominating things or even people in the home! The human keeps viewing the dog as a poor, pitiful rescue, meanwhile, the dog feels strong, is getting regular meals, is gaining weight and is constantly presented with weak human energy… so… it decides to take the lead.

Stop living in the past and take action in the present to help your dog. The fearful dog owner’s attitude should be one of calm assurance. You may have to fake it until you make it! You need to be a source of calmness for a dog who is being fearful, but do not attempt to soothe with human talk, treating or petting. Using treat training for fear will not help unless the fear is very minor. Cut off any unwanted fear behaviors early, before the dog raises its energy too high, and then calmly ignore the dog.

Remember, do what a normal older dog would do…either adamantly disagree with the behavior or totally ignore it, or both, depending on what the situation dictates. 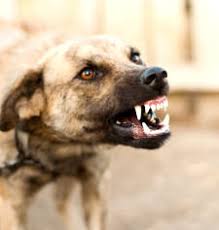 As long as your dog is allowed to continue in fight/flight , and keep the energy escalated, the dog will never get over the fear. Whatever you do, do not let the dog run or leave the situation. I almost always recommend using a leash in the more severe cases, as this lets us stop the erratic and dramatic fight/flight movements. This gives us access to control the dog’s head and manipulate the body to help calm the animal.

There is no reason for your dog to continue living in fear. If your dog is fearful in any way it can be taught to choose the appropriate calming social signals that are inherently inside every canine. If you work on overcoming the fear, instead of just accepting it, your dog will become more social, playful, intelligent, relaxed and happy.

If you need help I am just a phone call away.
Seize the day

Written by Garrett Stevens, owner/operator of Alpha and Omega Dog Training; this article first appeared in the July/August issue of Pet Connection Magazine.

If you really want your relationship to grow in a natural, healthy, and beneficial way and if you desire to shrink and eliminate the fear and anxiety in any dog or pup whilst simultaneously increasing confidence and social relaxation and obedience then look no further than my HOT listed book, Dog Myths!  It is the complete opposite of what most professionals are teaching and, because of this, it works so much more efficiently and naturally than the mainstream garbage.  Did you know that you don’t have to Bribe your dog or pup with food to motive it?  Did you know that you don’t have to smack it around and use harsh handling either?  Both of those shoddy methods are clear evidence that most professionals are woefully behind when it comes to the calming natural language of our dogs!  Order Dog Myths and watch the changes happen before your very eyes!

Dog Myths: What you Believe about dogs can come back to BITE You! by Garrett Stevens 5 thoughts on “Dealing with a Fearful Dog”